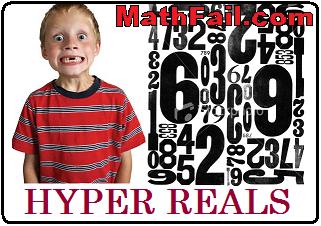 Via reddit I stumbled upon this site which talks about something called hyperreal numbers and claims that in this theory, the equation 0.999… = 1 is false.

For those who follow the internet, the question of whether 0.999…=1 has come up a quadbrazillion times on practically every math related forum and even the non-math ones. And every single time it turns into this huge argument with

and neither of them winning. Some mathie forums even have strict rules banning users against posting topics that deal with 0.999….=1.

But the site mentioned above actually gives some decent points to support why 0.999…=1 isn’t necessarily true., but you have to change some of the concepts that we take for granted.