There are some questions in life that need to be answered and this is definitely one of them.

In Armageddon, a NASA guy comments that a plan to shoot a laser at the asteroid is like â€œshooting a b.b. gun at a freight train.â€ What would it take to stop an out-of-control freight train using only b.b. guns?

The GE Genesis Series I locomotive weighs 12 metric tons and travels at around 45 meters per second.

If you bounce a single BB off the front of the locomotive from point blank range, you slow it down by about a foot per day.

The Tactical Edition Drozd Blackbird is a high-end BB machine gun (of course there are BB machine guns). It fires 1200 rounds a minute at a muzzle velocity of over 200 meters per second. At those speeds, standard BBs are capable of fracturing bone.

Unfortunately, even instantaneously emptying the full 600 rounds into the front of the train would only reduce its speed by a small fraction of a percent.

A single person with a BB gun can’t do it. But what if we had an army?

Weâ€™ll give each person a patch of ground two feet by four feet. This is a little cramped, but it should give them room to fire in an arc over the shoulder of the person in front of them. If we restrict them to 45 degrees in front of the train on either side of the track, we can pack about 100 people within 10 meters, 300 more within 20 meters, 550 more within 30 meters, and another 750 within 40 meters. 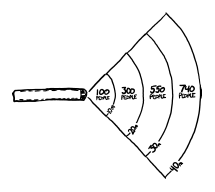 At t=0, the people within 50 meters of the trainâ€”all 2,500 of themâ€”pull the triggers, unleashing 100,000 BBs per second. As the train plows ahead, people in front magically fly sideways off the tracks. This is unrealistic, but we canâ€™t let them slow down the train with their bodiesâ€”that would be cheating.

As those people stop firing, people further down the tracks come into range and start shooting. The train is moving so quickly that any one person only gets off a few dozen rounds before the target moves past (or through) them.

At any given time, there are 45,000 BBs in the air. But thereâ€™s a problem: When the steel balls bounce off the front of the train, they donâ€™t disappear. They fly back at the shooters (whoâ€™ll probably shoot their eyes out) and into the line of fire. At its peak, this cloud of ricochets deflects nearly 1% of incoming shots via BB-BB collisions. This is a neat effect, but it doesnâ€™t substantially interfere with our operation.

Unfortunately, even this hail of steel takes several excruciating minutesâ€”and almost two kilometers of trackâ€”to stop the train. That means weâ€™d need over 100,000 shooters lined up along the track, and arming them would cost in the neighborhood of $50 million.

We can do better, but weâ€™ll have to relax the BB gun requirement.

The AK-47 has a muzzle velocity of 715 meters per second and fires a bullet which outweighs a steel BB by a factor of 25. The bullets go so fast that they penetrate into the body of the train (which means theyâ€™re a little less efficient at transferring momentum, but it doesnâ€™t really matter).

Want to find out how the AK-47 will hold up against a train? Go to XKCD now.

1 thought on “Can You Stop A Train with BB guns?”