In the Futurama episode The Prisoner of Benda Ken Keeler displays and proves an original theorem in order to advance the plot of the episode. 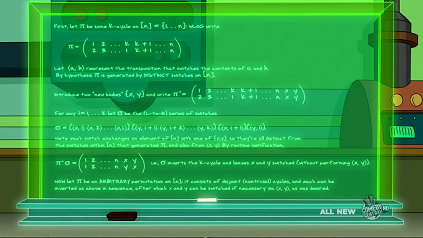 In the episode, the professor invents a machine that swaps the minds
of two people, but the swap can only happen once for a given pair of
people. The problem posed is:

Given a group of people with swapped minds (with some swapped several times), is it possible to return each mind to their original bodies?
What are necessary conditions?

The theorem provided by Futurama is now named the “Futurama Theorem” and has its own entry on wikipedia! The theorem states that, no matter how many individuals have swapped minds with one another, everyone’s mind can be returned to his or her original body by using only two additional individuals (who have yet to swap minds with anyone).