I just watched that movie called Old School (yes it’s from 2003). They had a nice math question during the movie. It was as follows:

Which of the following is a generally accepted graphical technique for determining first order system parameters?

You can see the clip over at Oliver Knill’s site: mathematics in movies. 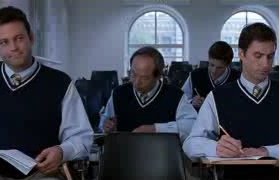