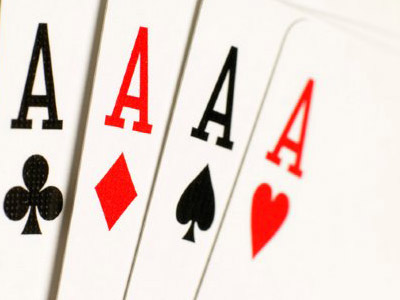 “There are four ranks of cards, instead of the usual 13. Instead of 2 through Ace, cards are ranked according to the topological classification of their symbol … 2,3,5,7,J,K all have the same property that they can be deformed into a dot or line. These are the lowest ranked cards. In fact, by themselves they’re worth dick–hence the name for these cards.

4,6,9,A are topologically the same as a ‘o’, and hence are called holes, ohs, or–if you can get away with it–hoes. These are the second ranked cards in ascending order.

10 is in a class by itself because it’s a combination of a dick and a hoe, so it’s called a Split, and is third ranked.

8,Q are topologically the same because of the way the Q is made on cards, with the slash going all the way across and creating two holes. This is the highest rank–the double hoe, or just double.“

Go to the reddit link to find out the rules of play.