This has honestly been all over the internet. EVERY single blog/website I read had this — boing boing, slashdot, digg, digg again, mixx, reddit (posted 4 times actually), among with a billion other sites.

AHHHH. Enough with the stupid pizza slicing!!. Anyways, if you seriously haven’t seen this yet then it’s at the link below:

“Suppose the harried waiter cuts the pizza off-centre, but with all the
edge-to-edge cuts crossing at a single point, and with the same angle
between adjacent cuts. The off-centre cuts mean the slices will not all
be the same size, so if two people take turns to take neighbouring
slices, will they get equal shares by the time they have gone right
round the pizza – and if not, who will get more?

Of course you could estimate the area of each slice, tot them all up
and work out each person’s total from that. But these guys are
mathematicians, and so that wouldn’t quite do. They wanted to be able
to distil the problem down to a few general, provable rules that avoid
exact calculations, and that work every time for any circular pizza.“

And what kind of post would this be if I didn’t include a picture. Blue pizza yum: 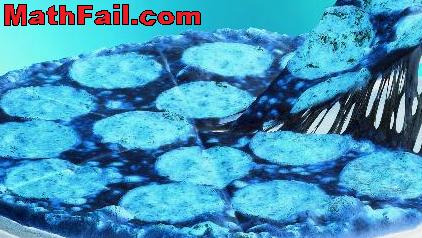