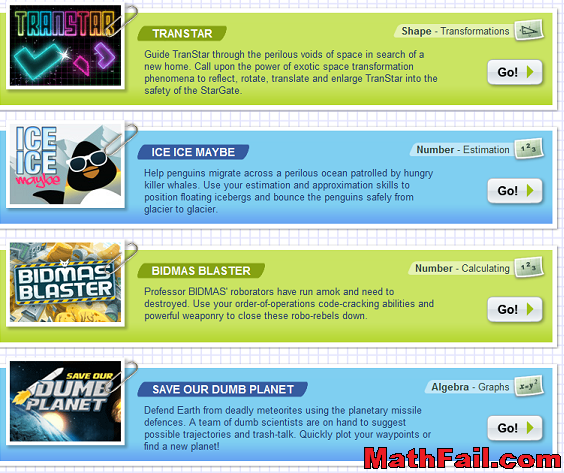 This Reuters article talks about Oxford professor Marcus du Sautoy and how he is an advisor for the mathy webgame website:
www.mangahigh.com

It’s called Manga High and illustrated in the style of a Japanese comic.

“He said the aim had been to make an integral part of the games “really challenging kinds of maths” and not just mental arithmetic.

A number of schools in London as well as Tennessee in the United States are trying out the website, which includes a game called “Save Our Dumb Planet,” where children have to enter coordinates on a graph to aim a missile at an asteroid heading for the Earth.

“I think the teachers have been very impressed by the depth of the mathematics that we have managed to embed in these games. You can only get a high score if you do the maths,” Du Sautoy said.

He said the game was a good example of the sort of maths that real scientists use, in this case to chart the course of a spaceship through the solar system.“

I went to the website and it’s pretty damned cool!! Go have some fun!