As pointed out in this boing boing post, the paper titled “Human group formation in online guilds and offline gangs driven by a common team dynamic” discusses how the structure of online guilds can be modeled using the same mathematical models as street gangs.

“Massively multiplayer online games typically allow individuals
to spontaneously form, join, or leave a formal group
called a guild. […] Millions
of people worldwide log on to the world’s largest online
game World of Warcraft (WoW) for the equivalent of
several days every week. Indeed, online games are one of the
largest collective human activities on the planet […]

A seemingly unrelated
social phenomenon that is also of great concern is urban
gangs. Urban gangs have been gaining in popularity
among young people both nationally and internationally.
There are obvious differences in the settings and
history of online guilds and offline gangs, however, the empirical
data sets that we have compiled enable us to perform
a unique comparative study of their respective grouping dynamics.“

It’s an interesting read
and the authors analyze the data that they have collected over the last
few years to show evidence of a quantitative link between the
collective dynamics of the two systems above. 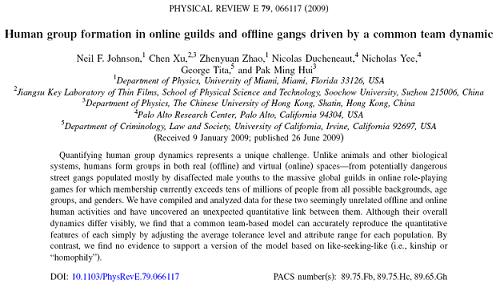